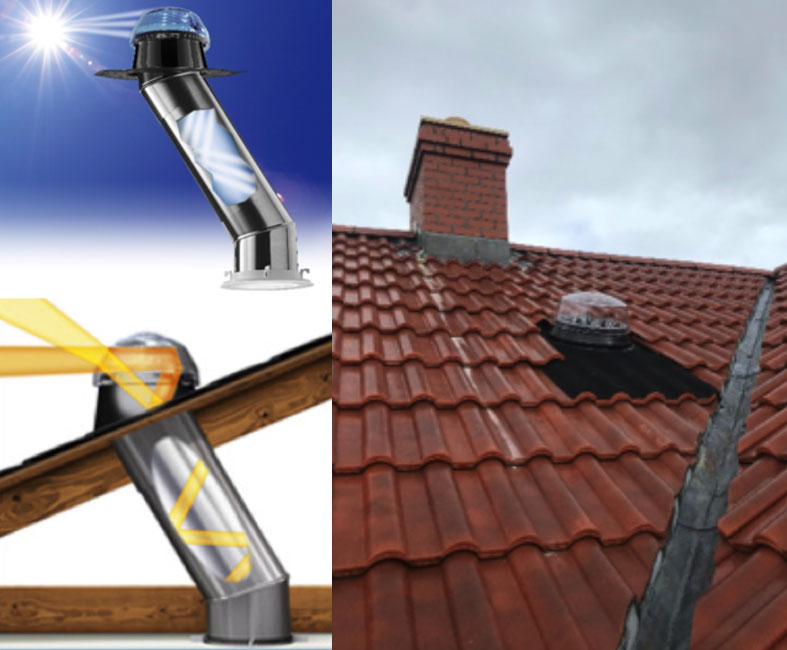 North, South, East or West – does it matter which direction a Solatube dome faces?

This is a question that so often arises that it is a serious contender for “most asked question”, when considering sun tunnels and where they should be installed.

It’s understandable why people can often become quite concerned and worked up about the exact and precise positioning of the Solatube dome on the roof, however it’s time to debunk a few misconceptions.  The first of these is that Solatube sun pipes are not as dependent on DIRECT sunlight (i.e. sunlight coming from the sun in the south) as solar PV or thermal panels.  Instead they can work incredibly well on diffused, overcast light on cloudy days – unfortunately our most common day in the UK, and that means that a Solatube sun tunnel remains highly effective and bright even on a north facing roof.

So, I tend to start by explaining a few of the basics, because Solatube sun tunnels are not actually rocket science. My explanations here are not strictly ‘science’ either, but are based on good old common sense; so here goes:

A Solatube dome faces the sky – the ultimate source of daylight

A Solatube sun pipe allows light in to your room, much like a window. So, if it’s light outside, it will be light inside.

This is because a window is dependent on reflected light entering the room horizontally; light that is reflected off whatever the landscape is outside, and on a north facing wall this is always going to be partially shaded compared to a south facing wall.  Whereas a Solatube is gathering ambient daylight from up on the roof where it is always brighter and less shaded.  Hence a Solatube sun tunnel is not as reliant on reflected light because brighter daylight is arriving directly at it from the sky above where there are no obstructions.

In the UK most days are overcast with uniform, ‘ambient’ light

But there’s more to it than that.  Typically in the UK most of our days are somewhat overcast, creating a very uniform level of ambient light.  On those rarer sunny, blue-sky days the light source is much more directional – direct from wherever the sun is in the sky.  So, when we have a bright sunny day, the difference between a north facing Solatube and a south facing one is more noticeable, whereas on overcast/cloudy days the difference is far less and may even not be that noticeable at all.  And there are far more overcast days in the UK than sunny ones!

So, ‘physics‘ lesson over, it’s back to where to position your Solatube dome.  Start by considering how homes are designed and built and most importantly – do you know of any buildings that don’t have windows in a room simply because it faces north?  No, we don’t and that’s because even a north facing window lets in enough light to help light up a room.  Similarly and for the very same reason, there is no harm installing your Solatube sun tunnel dome on a north facing roof (in fact the Solatube I am working under at the moment is on a north facing pitch, simply because there is no other choice or option) and it gives me more than enough light to work in.

In fact, as touched on above, a Solatube on a north facing roof pitch is much more effective than a window or Velux style roof window that faces north, because it is able to capture the ambient daylight coming from the sky all around.  Whereas a window is dependent on the light being reflected off the landscape outside the window.

So, a Solatube sun tunnel installed on a north facing roof will still deliver lots of very bright daylight in to a dark room, more so than a window on a north facing wall.  And the difference between a north or south facing Solatube on the majority of overcast days in the UK is not all that great, (although it is more noticeable on a sunny day).

However, if you are in a 50/50 situation where the Solatube dome could emerge on either a north or south facing pitch, then it’s best to go for the south facing one.

Go for the shortest, straightest, most direct tube run

Sometimes it’s also worth running a slightly longer and more angled tube run to reach a south facing pitch (provided you can avoid any obstacles in the roof space), but (and this is a big BUT), there is a trade-off between a south facing dome and the length and angles of a tube run.  Essentially, the longer the tube run, the less light and also the more angles and bends the less light.  Or put another way, the shorter and most direct the tube run usually gives you the most light.

And not only is it about the amount of light, there also needs to be a cost – benefit trade-off and the longer the tube run with more bends, the more it costs.  So you might reach a point where the additional tube length and bends don’t actually give you more light and the associated costs are not worthwhile.

Generally, the best rule of thumb is to go for the shortest, straightest and most direct tube run.  And if that takes you to a north facing roof then don’t worry; you’ll still get loads of bright daylight from your Solatube sun pipe.

But what about east or west facing roofs?

Well the same sort of principals apply:  On a blue-sky day you’ll get more light in the mornings from an east facing roof and more in the afternoons on a west facing pitch.  But once again, on a typical overcast/cloudy day in the UK, the difference won’t always be that great, so go for the shortest, straightest and most direct tube run.

Two other points to bear in mind – the shallower the pitch of your roof the more effective a north facing dome will be.  Similarly, the closer the dome is to the ridge of the roof, the more light you will get.  This is because the dome will be less shaded in these positions.  We will always consider these aspects when advising on how and where to install your Solatube sun pipe.

These can be positioned within a Solatube dome and are 2 further important elements that ensure the maximum amount of daylight is gathered and directed down a Solatube, wherever the dome is positioned.  But more on this in another blog!

So hopefully that gives you a better understanding as to why it is not critical to position a Solatube dome on a south facing roof; ANY direction will still deliver lots of bright daylight from your Solatube sun pipe.