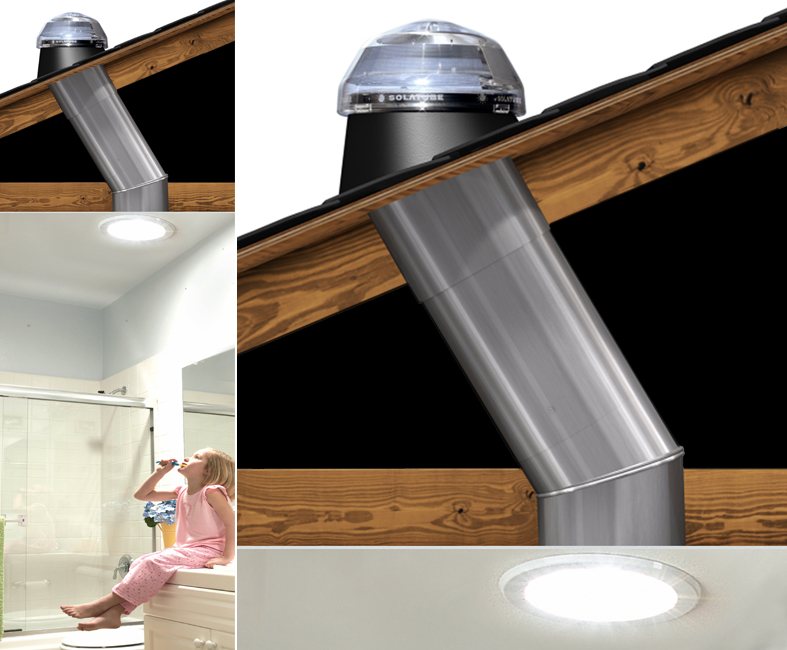 Solatube – the skylight alternative
Top 6 things you should know

Solatube is the originator of the ‘tubular daylight system’, also known as sun tunnels or sun pipes. Often copied and referred to as Solarspot, Sunpipe and Lightway, it is worth knowing that they are NOT all the same.  Here is Solatube Southwest’s guide on what you need to know about the alternative to skylights and Velux style roof windows.

So, how does a sun tunnel work?  A clear dome on your roof gathers ambient daylight from all around and pipes it down a highly reflective tube to a diffuser in the ceiling of the room below, delivering exceptionally bright daylight in to your dark home.

The dome can face any direction and still deliver lots of very bright light.  A sun tunnel is very bright and a single system can easily light up an entire room.  They are specifically designed to direct light along the tube, often over many meters, unlike a Velux style roof window with a plasterboard light well or shaft beneath it.

2.How bright is a sun tunnel system?

Sun tunnels or Solatubes are VERY bright, delivering large amounts of daylight in to dark rooms and transforming them in to light, bright spaces.  Most people are extremely surprised when they see just how bright and how much light a Solatube can deliver. A Solatube can therefore make a BIG difference in almost any room.

Quite simply, Solatubes are the most effective and efficient way of delivering daylight in to a room, providing as much light as a window many times its size.  A single, sun pipe can comfortably light up a typical room making it bright enough to read and write in, all day long so you would never need to switch a light on again during daylight hours.

A small room such as a typical bathroom (approx 3m x 3m or 10’ x 10’) can be lit with a single small diameter Sun pipe or Solatube.

Whereas for larger rooms and spaces such as a kitchen, dining or living room or long hallways a single, larger diameter Solatube is usually sufficient.  And, as with windows, it is sometimes best to have more than one to help light up bigger spaces.

However, not all makes of sun tunnel system are the same/as bright.  There can be quite big differences in the amount of light that different makes of sun tunnel can deliver.  This primarily comes down to how reflective the tube is and the dome on the roof, as discussed below.

3.Which is the best sun tunnel system?

All manufacturers claim to have the best performance and they all pay to have their own independent tests.  Often they focus on a single element (such as the dome or the reflective material), or a single time of the day or year, to get their point across.  However, what is important is how much light the system as a whole delivers, consistently over an average year.

Beware of extravagant claims. Tests results claimed by manufacturers are usually benchmarked against the market leader, Solatube.  However, Solatube has recently redesigned their dome so that it now delivers even more light than before, resulting in competitor’s tests being out of date as they are based on the old dome.

Ultimately, after Solatube, only the Lightway and Solarspot are also capable of delivering similar amounts of light.

4.How reflective is a sun pipe and what’s the difference between flexible and rigid tubes?

It only takes a small percentage difference in the reflectiveness of the tube to make a big difference in how much light is delivered to the room below. Solatube uses the worlds’ most reflective rigid material at 99.7% and hence ensures that the majority of light collected by the dome is delivered to the room below – certainly more than most other systems.

Systems using a flexible tube, such as the Velux sun tunnel, simply do not deliver any meaningful amount of light. The Building Research Establishment undertook their own independent tests and established that, to deliver the same amount of light as a rigid Solatube, you would need to install 10 (yes, that’s correct, 10) flexible tube systems.  If you only came away with one piece of advice from all this, then do not install a flexi tube system as you will probably be very disappointed.

5. Why have a dome rather than a flat roof window?

Whilst a flat roof window is unobtrusive it is also dependent on direct light shining down it, whereas a dome on the roof gathers ambient daylight from all around and directs it down the tube, i.e. it gathers much more light, all day long and all year long, including whenever the sun is not shining directly down it, whatever direction it faces. A flat glass collector works well only on south-facing pitches.

So, whilst a dome collects the most light, Solatubes low profile flat glass collector is the ideal solution where the appearance of a traditional skylight is preferred or where planning/listed building consent insists that a dome can’t be used.

6. Acrylic, polycarb or glass dome – which is best?

Solatube is the only company that offers BOTH an acrylic and a polycarbonate option for the same price so you can choose which dome to have. What’s the difference? – acrylic doesn’t discolour so much as polycarbonate.  However, acrylic is flammable and continues to burn once the heat source is removed, whereas polycarbonate does not.

Solatube prefers to fit a polycarbonate dome as this complies with UK fire spread Building Regulations.  If discolouration occurred Solatube would replace under warranty. Alternatively, chose the acrylic dome.

Glass domes are more susceptible to condensation because they provide a colder surface than plastic for condensation to form on.  Consequently they must have a double glazed solution, preferably at dome level.

Solatubes continual product development has resulted in a new dome design that now delivers even more light than before, ensuring that Solatube remains the world’s best tubular daylight system. Tests results claimed by competitors are all based on the old style dome and are out of date.