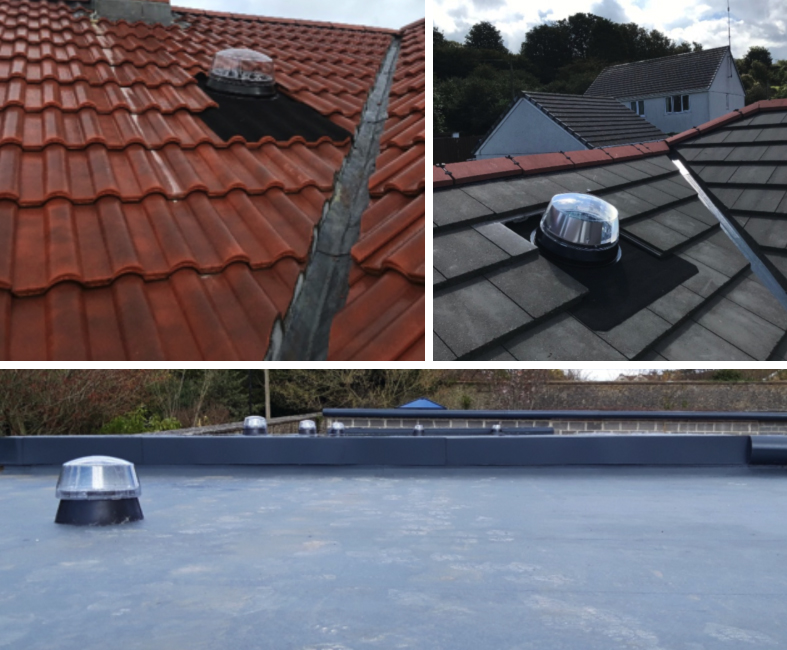 1. How bright is a Solatube sun pipe?

Well, I suspect you anticipated this, but the beautiful thing about our answer is that actually it is so true. I seem to spend more time reassuring people that they either need a smaller Solatube, or that they need fewer sun pipes than they think they need. And if you’ve not experienced a Solatube sun pipe before then that’s understandable, but you should really take our word for it. Would I actually be saying you need smaller or fewer systems if we were not totally confident about how much light a Solatube delivers?

It’s lots of light: just take a typical bathroom, perhaps 3m x 2.5m, or single bedroom around 3 x 3.5m and get rid of the window to make it pitch black. Now install a single, small 230mm diameter Solatube 160DS and it will comfortably light up any room of this size up to 10 sq.m. Bright enough to read, work and write in without any lights on, during the day. In fact, as long as it’s bright enough outside, a Solatube sun tunnel will deliver practically all of that daylight direct in to the room below.

Take a typical kitchen or large landing, say 5 x 4m or even more; if they are gloomy or very dark then just a single 330mm diameter Solatube 290DS will comfortably light up rooms and areas of this size, transforming dark spaces in to bright, daylight filled happy spaces!

Once again, you’d expect me to say this, but having been installing systems for over 13 years now, I can confidently state that we just don’t get leaks. And this is because the Solatube sun tunnel, in particular, has been designed to an extremely high standard; in fact it was the original inventor of tubular daylighting systems, setting out to design a solution that piped in bright daylight in to dark interiors, whilst avoiding heat build-up from direct, overhead sun.

Solatube started with a clean sheet of paper and thought through the problems and came up with the best solutions. Whereas, practically every other system you come across has simply copied the original Solatube design, and in most cases have focused on finding ways to make it cheaper. In doing so they have actually come up with poorer design solutions, utilising lower grade materials that easily fail. It’s like the old comparison that people used to make between the quality of the BMW car brand and British Leyland cars.
Solatube sun pipes are an extremely well designed system, manufactured to very high standards, utilising high grade materials and components – there’s no cutting corners with a Solatube. Consequently Solatubes are the only product of its kind to be accredited by the British Board of Agrément (BBA Certificate no 08/4597) – an independent statement of safety, quality and hence compliance with UK Building Regulations. And the difference is obvious once you put two systems side by side; the quality shines out of a Solatube leaving the others in the shade.

3. What’s the difference between flexible and rigid sun tunnel tubing?

Time and time again customers ask me why their flexible tube sun tunnel is so dim and hardly lights the room up at all. This is a point that really frustrates me, as very often people believe that all sun pipe systems are as bad as these flexi tube systems. But they are not; by an extremely large margin. In fact, flexi tube systems are SO bad that personally I believe they are a bit of a con and a rip off and shouldn’t be sold.

Typically they are installed by, or for people, who just don’t understand how these things work. Often it’s a homeowner who just hasn’t done their research or considered a very basic and simple bit of physics. Other times it’s a builder or installer who also doesn’t understand and thinks that it will be easier (and cheaper) to fit a flexi tube and doesn’t care about the outcome, i.e. delivering daylight in to dark interiors.

To put it simply, the inside of a flexi tube is like scrunched up tin foil and any light entering this tube is simply bounced off in myriad different directions, very few of them being down the tube in to the room below. Whereas a rigid Solatube coated with the world’s most reflective material at 99.7% will ensure that each time the light bounces it is directed straight down the tube and in to the room below.

Systems using a flexible tube, such as the Velux sun tunnel, simply do not deliver any meaningful amount of light. The Building Research Establishment (the BRE) undertook their own independent tests and established that, to deliver the same amount of light as a rigid Solatube, you would need to install 10 (yes, that’s correct, 10) flexible tube systems of the same size. If you only came away with one piece of advice from all this, then do not install a flexi tube system as you will probably be very disappointed, whereas a Solatube will deliver 10 times more light, but certainly does not cost 10 times more.

4.Why use a Solatube dome over a flat skylight?

Firstly, a dome is able to gather ambient daylight from all around and direct it down the tube – imagine it as a giant funnel, with all the daylight pouring in to it. A flat skylight, however, is dependent on sun light shining directly down it, so if the sun is not high in the sky and above the skylight, then a skylight will struggle to capture anywhere near as much light as a dome on a Solatube.

The best example of this is where a skylight or Solatube has to be installed on a north facing roof. Any flat glass roof window or skylight will simply be unable to gather very much daylight because they are facing away from where the sun is – in the south. However, with the dome of a Solatube it is able to pick up the daylight from all around and still ensure that you get masses of bright daylight in to dark interiors.

In fact, the 160DS 230mm dia Solatube system I am working beneath at the moment emerges on a north facing pitch, simply because there is no other choice – it has to go there. However, it still does a fantastic job, piping lots of bright daylight in to my office so that I never need to turn the light on during the day, yet I can continue to work without the slightest problem.

And here are a few other things to bear in mind…

That said, we are not against windows or roof lights, which can be opened, plus you get a view out of them. However, it is about using them in the right situations and being aware of the pros and cons of each.

5. How much does a Solatube cost?

We also offer supply only and these come in anywhere from £384 ex VAT (£460 inc VAT) up to typically around £750 ex VAT (£900 inc VAT), all depending on the size and length of the system and choice of diffuser.

Wow! There are 5 rather long answers to 5 very direct questions, but I hope you’ve found them illuminating…

So, if you are interested in bringing natural light into your home, why not give us a call at Solatube Southwest to find out whether a Solatube sun pipe can help you.