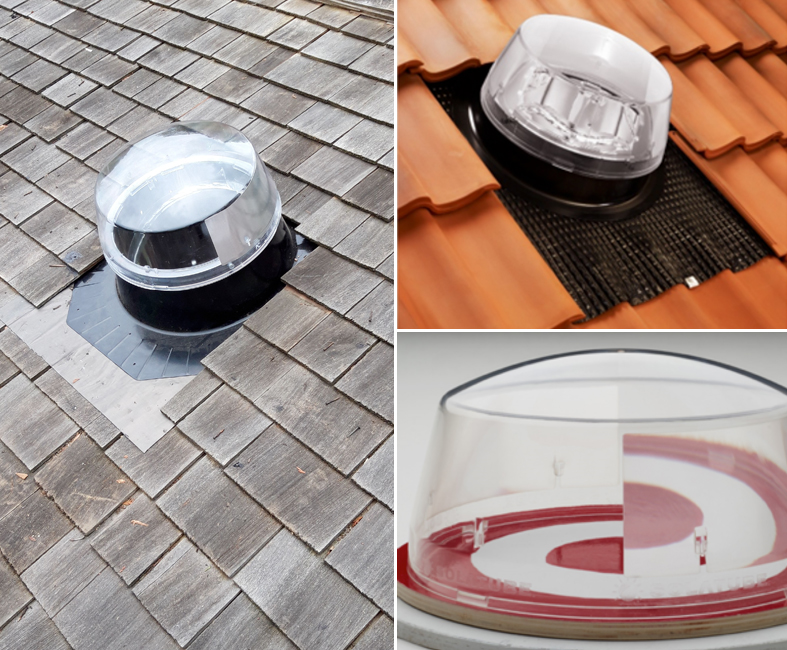 Top 5 reasons why the new Solatube dome outperforms the competition

Solatube has continued its strategy to carry out research and development in to sun tunnel technology. This research has resulted in a redesigned dome, specifically for Northern Europe, that delivers more light than ever before, eclipsing the competition and ensuring that Solatube remains the world’s brightest sun tunnel system.

Solatube has always been at the forefront of dome technology. Solatube were the first sun tunnel company to introduce lenses in our domes, ensuring more light was transferred in to your home. Solatube Daylighting Systems use breakthrough optical technologies to pipe pure, natural light indoors. From sun up to sun down, daylight is captured by the Solatube patented rooftop dome and transferred through the world’s most reflective tubing.

And we’ve actually come up with 8 good reasons to choose the Solatube, but 5 sounded better, so please enlighten yourelves!

Whilst we continue to avoid the practice of bad mouthing other systems, you may have noticed that one manufacturer has no such concerns when it comes to Solatube. However, their current tactic of providing misleading information in order to try to prove that they deliver 70% more light just can’t be ignored.

So, we’ve focused on just 2 extremely important, key facts you should bear in mind when considering what the competition are saying.

Solatube redesigned their dome specifically for Northern Europe and also to help counter spurious claims, so that Solatube systems now deliver more light than ever before, eclipsing the competition and ensuring that Solatube remains the world’s brightest sun tunnel system.

Thanks to the new dome, Solatube sun tunnels deliver as much, if not more, light from early morning and well in to the evening, including during the winter months when the sun is lower in the sky, than any other system.

So, please don’t fall for misleading information. There is no up to date or current test data from the BRE comparing the market leader, Solatube, with any other competitor product that states it is 70% brighter. FACT!

In fact the Solatube remains the highest quality and brightest sun pipe system on the market, outperforming all the others by delivering more light consistently throughout the year from dawn until dusk.

Along with the new dome Solatube continues to use the world’s brightest solar tubing material to ensure you receive more daylight than any other sun tunnel system available today.

Plastic is a better material to use because glass transmits less light than plastic domes. In addition, glass is a much colder material than plastic and consequently systems using a heavy, glass dome are far more susceptible to condensation issues and require additional and more costly insulation to prevent this. Also, it is not possible to include UV inhibitors in glass so the reflective tube lining degrades and becomes less effective at delivering daylight.

Acrylic doesn’t discolour as much as polycarbonate over time. However, acrylic is a flammable material and continues to burn once the heat source is removed, whereas polycarbonate does not. Consequently, Solatube specifies a polycarbonate dome as standard as this is what complies with UK Building Regulations, but it is the only manufacturer to also offer an acrylic option for the same price, if you prefer. So you can choose which route you want to go down; something that the competition does not do.

Where Building Regulations apply (or you want the building to comply with Building Regs), then Solatube is the only system that complies according to requirement relating to the spread of fire. Regulations regarding fire spread at roof level are very specific and differ from those in most other countries.

Some manufacturers only offer an acrylic (PMMA) dome, which does not self-extinguish and continues to burn. Solatube domes are primarily made from polycarbonate, rated a Tp(a) material, which does not sustain a flame and will self-extinguish. Solatube’s BBA Certificate confirms that the polycarbonate dome meets the UK building regulation requirements. However, as mentioned before, with a Solatube you can also choose an acrylic dome if you would prefer.

Ultimately, Solatubes are available with either polycarbonate or acrylic dome material. Acrylic is compliant in most other countries, but not in the UK, as detailed above. We therefore recommend polycarbonate domes are supplied in the UK a standard, although the responsibility for compliance rests with the building owner. Our aim is to ensure the decision maker has accurate and appropriate information so that you can make an informed decision.

There is no need to clean the new Solatube domes as they are still maintenance free. The curved shape ensures that the dome’s surface is cleansed whenever it rains, making it maintenance-free, unlike a flat window which requires regular cleaning.

A polycarbonate dome is incredibly strong, it’s one of the reasons why they are specified by the Home Office for installation in prisons and detention centres – they are almost impossible to break, even with a sledge hammer!

Solatube roof domes are injection moulded for superior strength, using super-impact-resistant, Tp(a) fire rated polycarbonate with UV inhibitors. These domes are certified by the BBA to be compliant with UK Building Regulations.

Consequently, a Solatube polycarbonate dome will not break down over time and become brittle.

Currently there are no up to date comparative tests available for the sun pipe market. However Solatube intends to head back to the BRE soon to show how much more light is delivered by a Solatube than its competitors.

Existing online results can be misleading as some companies test different sizes against each other. i.e. The bigger the diameter of tubing the more light you will receive in general. The exception is of course flexible tubing which delivers a very poor amount of light for its size.